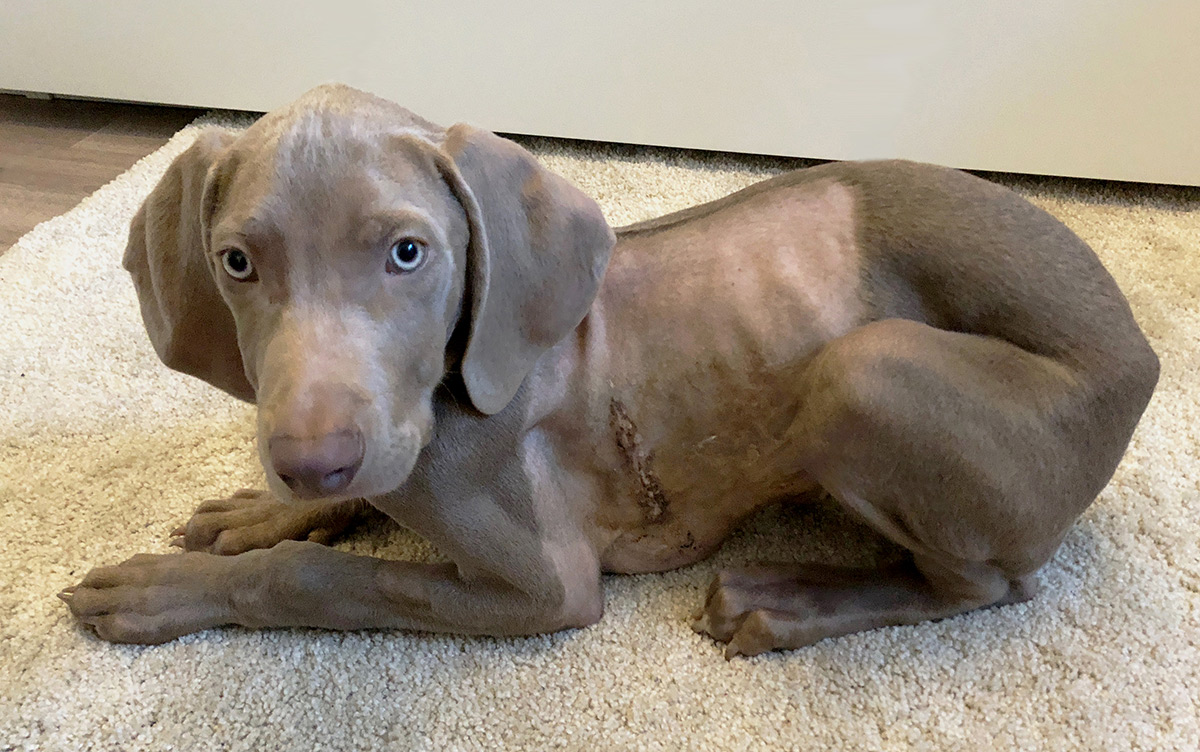 This is the inofficial English Version (only text elements) of Kresken, J.-G. (2019). PDA und HOD – Elliots Krankengeschichte auf hunderunden.de (translation by Emily – with a little help from google). For more information about Elliot visit telliot.de (in German).

Elliot was less than three months old and was about to take his life in his hands when, unexpectedly, he was in pain and fever just after the second vaccination. By that time, the puppy had developed well and was examined regularly. The fever mated with recurrent lameness of all limbs. Running became more and more difficult, racing was out of the question. Even independent standing was sometimes excluded.

Initially, the vet colleagues suspected a vaccination reaction because of the timing, which caused Elliot to get strong analgesics. However, his lameness did not improve significantly with painkillers or cortisone. Since it was not possible to determine externally, a first x-ray examination of the trunk was carried out, but unfortunately the cause was not found. As neither fever nor lameness disappeared after this, the dog was referred for special diagnostics. It should now be x-rayed again in our clinic and possibly a computed tomography performed. At the initial examination before the necessary anesthesia, a continuous murmur was detected. This could only under the left shoulder blade in the amount of 2.-3. intercostal spaces are auscultated. At this point it was very loud (grade 5 of 6) and audible. The examining cardiologist found a clinically relevant PDA (ductus arteriosus botalli persistens), which was already in a treatment-worthy stage. Therefore, anesthesia to clarify the lameness on this day was out of the question.

Since the growth gaps in the distal antebrachium (height of the carpal joints) were visibly thickened externally visible, the favor of the hour was used and X-rays were made without anesthesia. The result was a surprise for Elliot, but actually a very rare breed-typical disease of the growing bone.

The radiograph shows a bilateral HOD

Behind this is the hypertrophic osteodystrophy. It is a growth disorder that affects puppies of large breeds between the 2nd-7th month of life. It often occurs similar as it was for Elliot with fever, anemia, changes in the white blood cell and pain. The HOD was first described to the dog a few decades ago. One always suspected a deficiency in the diet, especially a vitamin C deficiency and errors in the protein content of the feed. Meanwhile, there are some reports, publications and a study on Weimaraner, which suggest a temporal relationship with the vaccine. The exact cause of the disease is still unknown. A genetic predisposition to modified live vaccines is suspected which leads to an immune reaction on the cartilage cells of the growth cells.

Fortunately, the disease disappears with the end of bone growth. For Elliot, but first the smaller problem. A PDA, as found in the heart of Elliot, is fatal to nearly 2/3 of the puppies in their first year of life. Therefore, this must be closed. The PDA is a blood vessel that has not closed properly after birth. Therefore, blood also flows past the lungs past birth back into the left heart, which then greatly enlarges.

We perform both methods of closing a PDA at the clinic.

1. Interventional closure, through a small hole in the groin, a small stopper is inserted into the vessel under fluoroscopy using a cardiac catheter.

2. Open surgical closure through a hole between the ribs, the blood vessel is dissected free and closed with thread or a clip.

Due to the special medical history of Elliot with the increased inflammatory levels for weeks, we have decided not to insert an implant by catheter, in order not to risk rejection reactions of the implant in a blood vessel (danger of thrombosis). Therefore, we chose the open surgical approach to close the PDA vessel from the outside. Since his inflammatory levels (C-reactive protein) were very high, initially non-steroidal anti-inflammatory drugs were administered and monitored regularly. After lowering of the inflammatory values ​​the procedure was carried out. The vessel was closed without significant complications and Elliot was released the following day.

Elliot has been doing well for a while now. He has no fever or pain anymore. The danger of dying of the heart disease is also banned. Here one has the rare case, which a dog has at once two but for his race known but rare dispositions at the same time. Like the disposition for Weimaraner’s HOD described in the literature, in recent years we have surgically closed some PDA in puppies of this breed by means of a heart catheter or openly.

For this reason, it is important to listen carefully to puppies hearts, especially prior to the first vaccinations. And not only on the left side, where you usually place the stethoscope – no, also under the shoulder blade, at the breast entrance and on the right side of the thorax. This is the only way to prevent a major problem from „slipping“.

Internal Links to Elliots Story on telliot.de: the whole story – or only PDA and HOD. 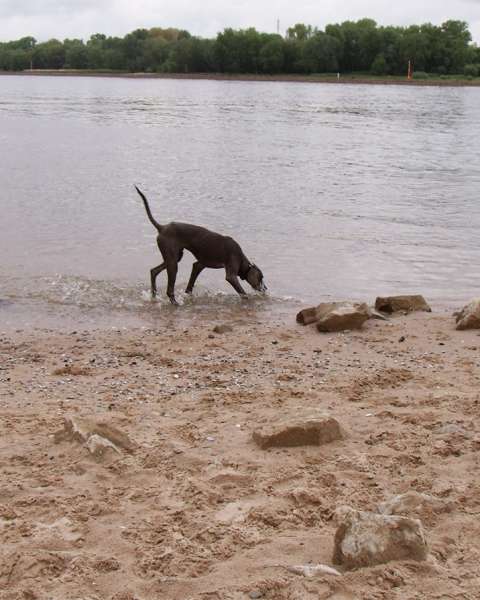 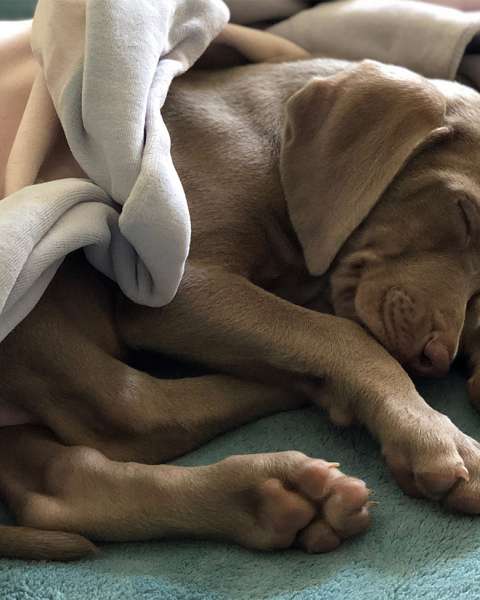